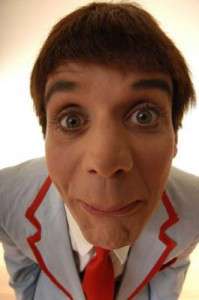 Rob Torres, One of The Greatest Clown I know

Before working on my own, I was working as an entertainer on cruiseships.
All my colleagues were talking about a fantastic clown: Rob Torres.

I have to confess, I was a bit jealous hearing so much enthusiasm and thinking to myself: they do not have seen me already performing!

I went to the theater to watch him, I laughed and cried because a good clown touches me and makes me feel so. I had to recognize from my pretention that this guy was really great.

To be honest, Rob is even more frustrating: he is not only great on stage, he is also a great person.

I went to talk to him after the show, Rob was really nice, no “prima donna” at all. He gave me generously some insights about clowning…which years after, I am still working on.

Sometimes, I write to him. He is always answering me so gently and with effective information.

Years after, when I began to live thanks to my own show, I have to admit that Rob Torres is not only one of my favorite one, but also one of the greatest clown I know.