I help event organizers
grow laughter in the hearts of their spectators. 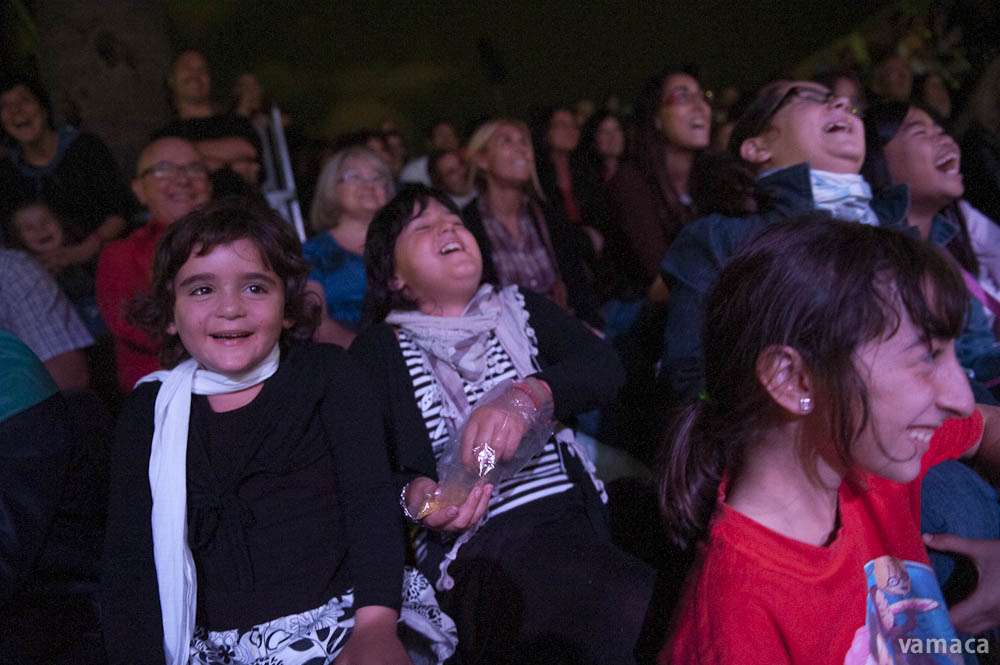 My mission is to help these committed professionals
in offering quality programming that earns enthusiastic applause from the public.

We live in a time where society is moving away from our essence, our humanity… and it’s in this moment that oxygenating the mind and the heart of the public through relevant culture is most vital.

The cultural world is living in a challenging time… in a society where technology and soccer dominate all, attract the public, share their values, move them, and ensure that you leave an event with the desire to return. Recommending this is a real challenge for any event organizer.

To be on stage represents a three-fold responsibility for me:

I am aware that programming a show is like placing a bet:

“Will the public like it? Or not? Will problems arise during the program? What will the audience think? ”

This is why I take great care in ensuring that my shows will be successful in growing the enthusiasm of the public and making them want to return to more events by this programmer.

Whatever the situation might be, the audience deserves my best self on the stage so that they are able to connect with the magic of the moment. That is my mission.

By personal expectation. Work that is well done releases dopamine and my weakness is that I can’t stand it if the public doesn’t get excited about my shows.

“My shows are designed to awaken creativity and
the forgotten magic inside each and every one of us.”

Committed to his mission to grow smiles in the hearts of his spectators, Michael Gueulette helps event organizers throughout Europe with their desire to gain the applause of their public.

Originally from Brussels, Michael gets along in 6 languages daily but you won’t hear many words from his adorable character, created by Michael and named “Gromic.” “Gromic” doesn’t speak but simply unveils his charming personality.

Inspired by the old traditions throughout the world of the clown and magic, his shows of visual comedy win the hearts of his spectators and cross over the barriers of language and age.

Well versed in the universal language of the smile, “Gromic” was created to bring joy to those attending festivals and theaters throughout the world. This takes place thanks to his particularly fine, touching, and very effective humor.

Dedicated to contributing to the improvement “live” art, Michael contributes to the Masters of Cultural Management program at the Universidad de Girona (Spain). There, he shares his experience as a professional performer and provides practical solutions for those destined for cultural management professions.

Michaels admits that one of his dreams is to reconcile the public with the art of the clown and has created programs such as “serpayaso.com” (“Be clown” in spanish) in order to help hundreds of aspiring clowns worldwide to develop quality shows and grow smiles with more awareness and value.

Today Michael Gueulette is considered a talented professional who is committed to the culture and his character “Gromic” is a success.

He currently resides in Barcelona and travels constantly to bring his unique variety of magic and joy to all parts of the world!

A Laughter Craftsman, I have dedicated myself to remind
the beauty of the human experience through acts inspired by the world of magic and clowns.

How do I create my shows?

Designed to awaken our humanity and the magic within us, my shows help the public to regain their sense of well-being and elicit human warmth.

My shows always respect these 4 principles:

When less material is used to create the scene, more work, talent, and searching is required to create the magic needed to entertain an audience. I don’t want a programmer to see their investment as simply renting material, but as if they are truly getting an authentic artistic work. In addition, I use everyday objects which allows viewers to be more easily engage with the story.

I don’t do any technical demonstrations

I believe in the principle that competition is not the only form of making yourself valuable and my shows demonstrate that a person can be loved simply by existing and not by proving that they are better than anyone else. Therefore, my shows are not created to impress the public, but to connect with them.

A picture is worth a thousand words. This means that I can communicate with a diverse group of people and break through the barriers of age and languages thanks to common symbols. Working without words allows me to connect directly to the imagination of every spectator.

I care about my audience

I reject the frontal form and consider it inadmissible to make fun of spectators during a show. Because of this, I develop routines so that volunteers who come up on stage can participate in the fun and end up triumphant and graceful, receiving the applause of the rest of the audience.

What are they saying about me?

“Making people laugh without vulgarity but with kindness and subtlety. It’s what gets Gromic” “Everyone I spoke with was talking about Gromic and so was a success hiring him for our event.”

“Gromic is a wonderful Clown. Great pleasure to work with”

Some of my clients

See Some More of My Clients

Discover what they’re saying about me in the news. 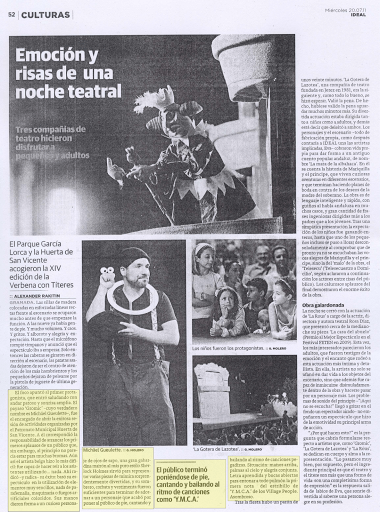 Excitement and laughter of a theater night

“The focus was on the first protagonist, who entered with clumsy gait and broad smile. The clown “Gromic,” whose real name is Michael Gueulette-was responsible for the successful opening session of activities organized by the Municipal Huerta de San Vicente.

To him fell the responsibility of starting the first applause of an audience, however, at first seemed no opened to many jokes. Even in this situation the Belgian artist did the hardest thing in show business: he was able to make the audience laugh by using … nothing.

There lied and lies his success: he based his show on the use of very simple elements, no paraphernalia, equipment or colorful fireworks. His hands shaped an oddball toad eyes, brown great coat in the style of Sherlock Holmes served to represent multiple pieces of mime surprisingly fun, and his hat, tie and dress were enough to finish decorating a character who put the crowd on its feet, singing and dancing to catchy songs. Description: hands up, palms to the sky and shared happiness. Forming letters and mouths open to sing very loudly the first note of the chorus of “YMCA” by the Village People.

“The earth trembled and shook with laughter with Gromic (Magician – Clown) from Barcelona with a tidal wave of applause for the artist on Sunday. The kids loved Gromic .. The fathers have played the game with our magician clown. It was a beautiful show to finish the weekend .. Even with the Bimbadaboum festival that attracts the same audience, we took lots of children and families. My hope was realized: Disabled institutions have emerged, It is a pleasure of welcoming these fine people to offer them happiness through our shows, …”

“The second event was Máaagia! from Gromic, an eccentric magician from Spain with an irresistible comedy that has captivated audiences of all ages.

The audience was literally kidnapped from the qualities of the artist, and thanks to its incredible verve, Gromic (Michaël Gueulette) can immediately create an immediate contact with the public, not relying on the word, but only on its wonderful expressiveness.

To remember the sketch with a jacket, a coat, hands and faces of this insanely funny mime and comic, and the interactions with the public, as with children who refused to openly carry out his directions, threatening to ruin the gags, but with shooting great skill by Gromic. Or with adults, dressed as giant frog with a huge coat and a briefcase on his head, or turned into human solid chair that collapses by failing to hold a heavy (!) Balloon in hand.

So great success with applause and laughter Máaagia!, Which has really proved to be a show of high caliber international ready for the European theater.“

Report from the Bradipoteatar for the International Theater Festival Calanchi

“Everything and the name, Maaagic! It is not a magic show. We could say that there is magic, but also a good dose of gestuality and, especially, an enormous respect for the world of the clowns.

Michael Gueulette, Gromic, presents a series of simple, naive, tender sketches, which often requires the assistance of the public, which, by the way, he uses with extreme subtlety. Maaagic! is the only word we will hear throughout the show, and this requires a very good presence on stage and especially rhythm.

With very few elements Michael Gueulette fills a long time during which he demonstrates us that he has has a good technique. A chair, a mic stand, a rack, a hat, a bag, a jacket and not much else is all that is needed to entertain us kindly. It is therefore a very clean performance.

Michaël Gueulette is Belgian and a few years ago that’s been between us. About what he does he calls it visual comedy, and his references are a guarantee for understanding his theatrical world: Avner, George Carl and Peter Shub.

I wish you could view him very soon, and that you can enjoy his tender and clean warmth presence on stage.”

«Gromic is one of those comic magicians who teach all the tricks and here it is funny together with a character worked pretty well, as gremblin endearing. The best moment was the one of the volunteers who he tried communicate without words with.»

«…as well as the belgian clown-magician with his Gromic show – although he has achieved this through wonderful tricks that released was releasing cathartics laughter, especially when assistants in the public were caught.» 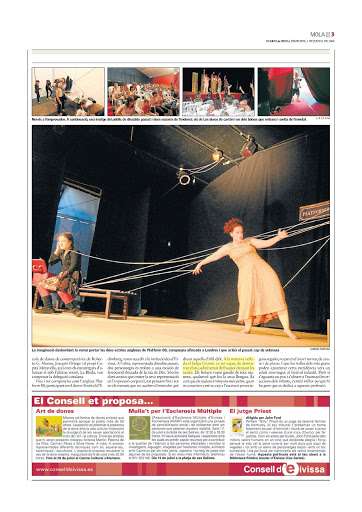